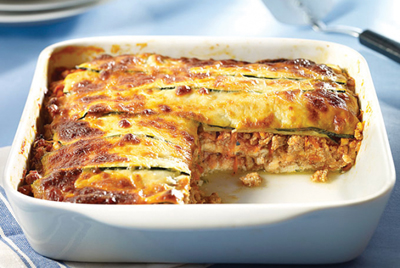 I finally tried this zucchini lasagna recipe the other day and was amazed at how great it turned out. I didn’t even miss the noodles. I only used about half of the Italian sausage I cooked and saved the rest for other recipes. I also used the same pan and the grease to quickly fry the strips of zucchini I cut with my mandolin. Frying them briefly helps remove some of the water as does putting them on a paper towel after grilling. For the sauce, you can make your own or use something pre-made. I also put a little bit of the cooked sausage in the marinara sauce.

In a large bowl, mix the cottage cheese, the egg, the Parmesan cheese and 1/2 cup of the Mozzarella cheese. I added most of the diced tomatoes and about 2/3 of the Italian Sausage into the mixture as well. Add salt and pepper along with 1/2 Tablespoon of Italian Seasoning. In an 8×8 pan, spread a little of the sauce in the bottom of a greased pan. Add your first layer of zucchini then top with cheese mixture, then top that with about 1/2 cup of Mozzarella. Add your next layer of Zucchini and cheese mixture. In this middle layer, I also added any left over diced tomatoes and sausage and then topped all that with Mozzarealla. I put a little bit of sauces in the middle layer, then added the final layer on top of that. After the third layer, top with remaining cheese and add a little bit of sauces across the top. Avoid using too much sauce as the recipe can easily become runny.

I baked in a 375 degree for about 30 minutes with the first 10 minutes uncovered. I then covered with Aluminum Foil until there was about 5 minutes left, then removed it to let the cheese on top brown a little bit. Make sure you give yourself plenty of time for the lasagna to sit and cool so all the cheese sets.

I was born and raised in the Northwest and wouldn't give up my home in Seattle for anything. But, my love of Mexico and travel has instilled a taste for tequila and spicy food in me. I am always trying to make old favorites healthier and love sharing my adventures.

This site uses Akismet to reduce spam. Learn how your comment data is processed.

Thank you for visiting DrinkFoodHome.com